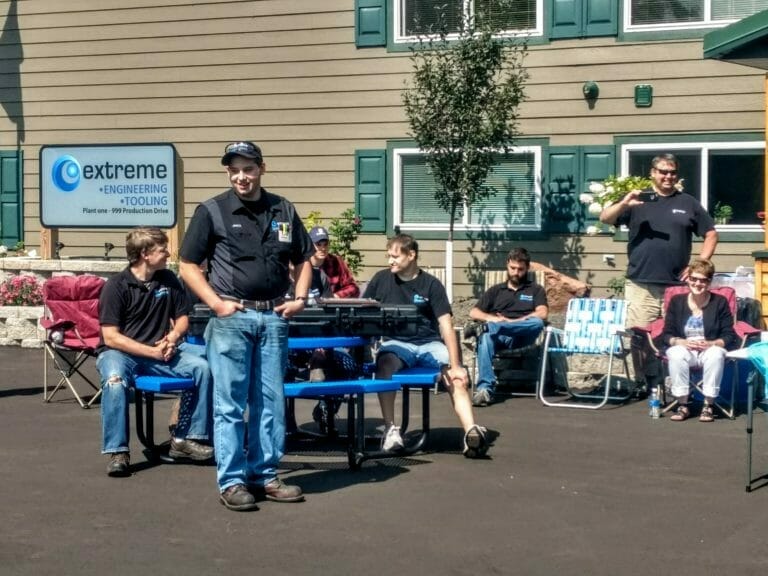 On the 1st day of September 2017 Extreme Tool & Engineering notched another company “first” during a congratulatory company picnic.  With the entire company assembled in a circle with bright warming sunshine coming down & plates filled with juicy pulled pork (smoked on-site by Lead-Moldmaker/Chef Andy Laurin) Extreme presented and awarded Jake Zielinski of Bessemer, MI with his American Mold Builders Association (AMBA) Master Moldmaker certification.  This certification removed “apprentice” Moldmaker from Jake’s title and replaced it with “master”.  This simple title change to signify his Journeymen’s Certification as Moldmaker did not happen overnight and was not Jake’s original path.

Jake began working at Extreme Tool & Engineering when he was 16 as a general laborer performing odd jobs such as injection molding press operation and janitorial work.  After high-school, Jake went went down the 4-year college path chasing a Mechanical Engineering degree as that was touted as the best path to personal and professional success.  During his first semester of his sophomore year, Jake returned to Extreme in a new capacity as a Mechanical Engineer intern.  This internship planted Jake squarely in the Moldmaker’s finishing department at Extreme where many Master Moldmakers performed their craft.  Mold making is an extremely technical profession requiring the mastery of complex mechanical systems and manufacturing processes such as CNC-milling, Wire-EDM, Sinker-EDM, surface grinding, hand polishing and more.  Jake rapidly fell in love with the Moldmaker profession because the Moldmaker is the person responsible to fit, adjust, time and assemble hundreds of components into the finished product.

Jake knew the path to becoming a Master Mold Maker was the path he wanted to go down because it combined the best of both worlds.  This realization caused some personal turmoil due to dealing with the stigma of leaving a 4-year college degree program to enter the work force as an apprentice, which would “only” result in a certification.  As a highly-inquisitive person, Jake began asking the journeymen Master Mold Makers he was supporting how they reached such a high level of precision-manufacturing prowess.  The Journeymen Master Moldmakers on staff at Extreme all shared with him that their certification was obtained through apprenticeship programs.  Jake approached the senior leadership at Extreme to see if they would invest in him by providing an apprenticeship program.  With several years of background employment history with Jake already, Extreme jumped at the chance to secure this bright young man within their workforce and agreed to provide the program.

Fast forwarding several years, Jake Zielinski of Bessemer, MI is the first graduating apprentice to achieve Master Mold Maker from Extreme Tool & Engineering.  Jake is an incredible asset to Extreme Tool & Engineering and just as big of an asset to the community he lives in.  Serving as a High-School football coach, musician in Marty’s Goldenaire’s & living life faith-based has rewarded everyone around Jake, as well as himself, with a rich and accomplished life.  Jake has a couple of decades to practice his new Journeyman’s craft of Master Mold Maker and Extreme is excited to watch this community-focused young man set the bar for those who come to follow in his footsteps.

To commemorate Jake’s accomplishment on becoming Extreme’s first apprentice turned journeymen Master Moldmaker, Extreme Tool & Engineering owner Mr. Mike Zacharias gifted Jake a brand new Custom Nosler .338 Win Mag rifle featuring a Kevlar stock that won’t ever give up, like Jake.  Mike Zacharias closed the celebration by saying “going first is never easy, but not only has Jake completed the initial segment of a life long journey, but he’s played an active role in creating a path for others to follow. From this day on and for every day after Jake can be proud to say he was Extreme’s First!”